The following document shows that the Islamic Government of Iran and the cruel Supreme Court Attorney, Mr. Rishahri the executioner, unjustifiably sentenced Khalil (Shoja) Darvish and Esfandiar Darvish based on some false accusations. 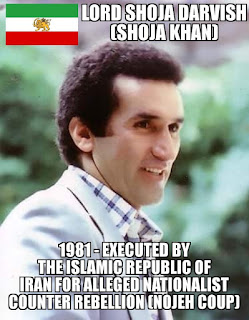 As the following document shows that the Islamic Government of Iran and the cruel Supreme Court Attorney, Mr. Rishahri unjustifiably sentenced Khalil (Shoja) Darvish and Mohandes Esfandiar Darvish based on some false accusations.

The second court meeting of a group of political and supplier agents of unsuccessful coup d’etat of Tir 59 (Nojeh) presided over by Hojat-ol-Islam Ri Shahri, continued its session in the first branch of Islamic revolutionary court of military, yesterday morning. In this meeting, in addition to nine accused who were trialed in previous meeting, four other accused were added. These four persons are as follows:

(1) Esfandiar Darvish, the political advisor to the president Bani-Sader the fugitive.

Accusations of another Accused

Then the revolution public prosecutor of military read the bill of indictment of Khalil Darvish known as Shoja (Brave). It has come in the bill of indictment that, Khjalil Darvish one of the active member supplier and political branch of the unsuccessful coup d’etat of 59, and born in 1327 (Shamsy-Ghamary), resident of Noshahr, diploma holder (High School Graduate), married having children, without penal (criminal) record, date of arrest: 31-3-60.

He is accused of having an effective role in “unsuccessful Coup D,etat”, and he has been recognized as the major agent of the purchase of arms and ammunitions for agents of coup d’ etat and occupation of Radio and TV station of Islamic Republic. He also has had visited the agents of the coup d’etat and had cooperation with them and probably had a share in Bani Sader’s plan of escape… His another accusation is taking advantage of Mostazafan Foundation

The above document is a true translation of the accusation of Khalil (Shoja) and Esfandiar Darvish by Mr. Rishahri the Executioner Supreme Court Attorney of the Islamic Republic Government who accused, sentenced and ordered to kill thousands of innocent Iranian youth.

During the September, 25th, 1982, the same year that Islamic Republic of Iran Executed Khalil (Shoja), we were informed that Islamic Government of Iran arrested Pahlavan (Champion) Jafar Darvish accusing him of political treason because he did not stop his sons to plot against the Islamic Government. Jafar Khan was kept in political prison for six years while received the most barbaric types of tortures that used to be part of tortures that were used during the dark Ages of Europe. Pahlavan Jafar Darvish and his Son Esfandiar Darvish were kept in political prison for approximately six years, where they received the worse and barbaric and inhumane tortures. Champion Khalil (Shoja) Darvish was kept in political prison and was badly tortured to the point that Islamic government of Iran, did not give his corps back to his parents. After all these tortures Islamic Government agents called Champion Shoja’s parents and told them that Shoja’s corps is buried in a grave in Behesht Zahra. In fact they charged Champion Shoja’s parents some money for the bullet they used to kill him. But no one knows how they killed him because Champion Shoja’s parents or family never saw his corps.

This episode of criminal activity of the Islamic Republic of Iran is only a small sample of hundreds of thousands of tortures, rapes and execution of both young men and women in Iran. After Islamic Revolutionary Government was established This criminal government did its best to arrest, torture and execute any Iranian who was considered national, strong, educated, and rich so that they would not have anyone to stand against them. For the rest of masses or sheep’s they religiously brainwashed them and kept them busy praying at home or in the mosques so that they would not know what was happening in the world.
at July 18, 2018

The Arab Muslim Slave Trade of Africans and Caucasians

If it was not for the 1400 years of Arab and Muslim Slave Trade, there would have been no slavery in America.   Over 28 Million Africans hav...

This is a weblog or "blog" journal. Our thoughts and opinions change from time to time…We consider this a necessary consequence of having an open mind. This weblog is intended to provide a semi-permanent point in time snapshot and manifestation of the various memes running around our brains, and as such any thoughts and opinions expressed within out-of-date posts may not be the same, nor even similar, to those we may hold today.